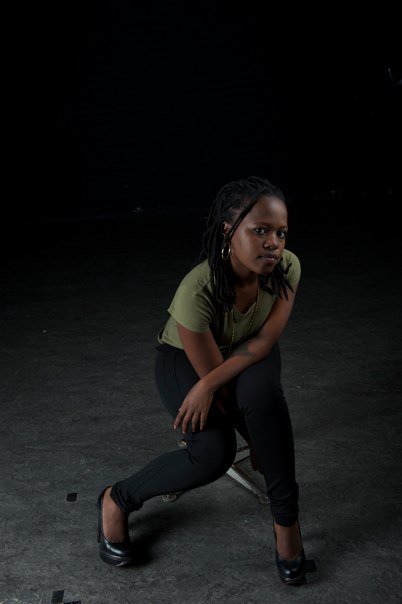 Heidi Sincuba talks to Karen Martin about seeing herself and being seen, and how rage fired a wide-eyed Zulu girl in the Netherlands to re-appropriate the African in her work.

"As ridiculous as it is to be represented as anonymous and half-naked somewhere in Africa, that has still seeped into the way "Africans" perceive themselves."


Karen Martin: You've moved around all your life. Why? Where have you been? And where are you going?

Heidi Sincuba: I was born in a Christian mission where everything was sober, stable and "logical". We learned about the Bible and the consequences of not believing it, and were educated at the mission's private school, at which topics like reproduction were eliminated from the curriculum. But my mother hauled me and my two brothers out of there when things got sour due to politics and other mission related issues.

We moved from relative to relative around KwaZulu-Natal, and sometimes stayed with my mom's employers when she worked as a domestic worker. My mother wanted to make a better life for us, so we got to move around to whichever place offered a better job. She worked in downtown Durban and then in Umgeni for a few years. During this time we were schooled in various Indian schools, from Stanger to Overport. My last few years of high school were spent at a Chinese school near Alexandra when my mom got a job in education and training in Joburg. And then we moved back to Durban when she started her own skills development company. I moved to Cape Town as soon as I could to study fine art. And here I am in Holland, still instinctively going wherever opportunity turns up.

KM: ITCH describes itself as "South African rooted and internationally relevant". What does this mean to you in the context of the internet and other globalising forces? Where are you rooted? And where are you relevant?

HS: Growing up in South Africa, I got used to being called a coconut: black on the outside, white on the inside. I was a decent kid, but according to my peers I wasn't black enough. And when I was with white friends, I was the token black girl. Here in Holland, the complexities are more elaborate. It's a strange place for an African to be, like limbo. I'm a foreigner, an "outsider" and just "not from here". This is how I am described, and this is how I work.

I am rooted in South Africa, because that's where my family is and that is the world that (for now) makes the most sense to me. But I can't predict where I'll be relevant. Everywhere I meet people like myself I'm delighted, because there's an irrational instinct that makes you believe you understand someone because they're from where you're from. "Dark people" as we're called in Holland - not from Ivory Coast or Ghana or Ethiopia or South Africa, but from "Africa". Somewhere down there. I've met so many different people eager to share how things are back home, but finding that their version of home doesn't fit the context. At this point, I'm just trying to make myself relevant, even where I'm not.

KM: The focus of your work is on the female subject and how it is represented and seen in different communities, and this is what your graduate exhibition at ArtEZ Institute of the Arts explores. Representing the other is often problematised when white artists represent black subjects, or middle class artists represent poor subjects, and so on: when the power relations have the artist in the more powerful position. As a black woman artist, are you able to approach the black female subject differently? How do you feel, as a black woman, about representations of black women subjects, both now and in the past, both in the arts and in the popular media? How do you see future representations of black women contesting and capitulating to over-determining ways of seeing and being seen?

HS: Being a black woman myself, I use the singular sentiments to compare myself with how I might be seen or represented. There have been many representations of the black female body, and only recently have there been representations of the black female body by black females. Previously, the represented black woman was a muted object of fascination, like a science project or a new toy. The image of the black woman had been appropriated, as it acquired (sometimes pornographic) implications in the Western context. So there isn't a lot to work with other than the problems between the black female subject and, say, the Western male viewer. But it's only fitting that all sorts of perspectives should inform new ways of seeing this subject, regardless of the secondary questions that may arise.

As a black female artist there is a very thin line between representing one's self and representing one's blackness. Perhaps that line is just an illusion - there are inter-cultural conflicts at play. As ridiculous as it is to be represented as anonymous and half-naked somewhere in Africa, that has still seeped in (like most things do) to the way "Africans" perceive themselves. Pop icons like Beyoncé and the Jacksons fuel the discussions about what it is to be black and whether that "black" concept will ever thrive commercially. Suddenly, we are not working towards challenging the Western viewer, but we must investigate black inferiority and other self-fulfilling prophecies. Colonialism, religion, cultural identity, migration, commercialism, sexuality: these issues influence each other and create new issues in the process. Nowadays one can't escape the topic if one is black, or even living among or around black communities. The way I see it, if the otherness is there and can be made into work - why not?

KM: You are also interested in the deconstruction of canons in the art world and popular culture. What do you think of Martin Gantman's work in the latest issue of ITCH, Odalisque Suite?

HS: Martin Gantman's Odalesque Suite is the kind of work I recognise as contemporary art: the artist takes something familiar or common and remixes it to revise or criticise our perception. That is the artist's task when relating to their environment. What would be an objectified female nude is transfigured with an iconic male face to become a suspicious, chauvinistic quip of an image. Odalesque Suite is witty and well considered.

There are a few similarities in our chosen subject matter, and we each interrogate canons based on our respective identities and subsequent points of view.

HS: Most of the dynamics between men and women are brought about by the fact that they are in the same community. They belong together, but they will never be the same. It's brutal but it's beautiful, and that is what we stereotypically base our art on, our prose and our music. The attraction between men and women is unquestionably fundamental. This is the elliptic origin underlying most of my work.

Perhaps the relative repulsion between different cultural communities is where the plot thickens. I started focusing on this when I moved to the Netherlands. A wide-eyed Zulu girl bent on joining in the investigation of sexuality in art and media, I was quickly told (not in these exact words) to be more "African". This is when I became enraged and more than eager to start representing the "African" in my work - re-appropriated. My work now has morphed into something that will probably morph into something else, but it is driven by my surroundings and my perceptions, regardless of where I am.

KM: What is it about Joyce Carol Oates that has influenced you? How does she continue to nurture you? Which other writers have influenced you and how?

HS: Joyce Carol Oates delves into human vulnerability, especially with the female subject, and her violent stories are critical and poetic simultaneously. She writes the way I imagine I'll write if I ever become an exceptional writer.

Even though I'm no longer a child, I remain captivated by Robert Swindells. I had to read his book at school. Abomination is like a favourite song to which one knows all the lyrics. Absolute perfection. I'm also wild about old school writers. I've never gotten over DH Lawrence, Ernest Hemingway and John Milton, and I read Jane Austen when I'm feeling positively girly. Something about that proper English makes you want to see if you can ever get the hang of it.

Nadine Gordimer, Zakes Mda and JM Coetzee are the writers that make me proud to come from a country with such a history of writing. Coetzee especially, whose words are like layers of human filth, presents the world and its people in a delightfully obscure way. You don't know if he detests humanity or if he feels utterly sorry for us all.

KM: On your blog you say you don't want to expect too much from having an art degree, but are rather relying on loving what you do and wanting to perfect it to take you where you want to go. What are you going to do next? What would you really, really like to be doing next?

HS: Right now I'm stalking art galleries and publishers, trying to get them to give me a platform to show my work. I'd like to be involved in a few exhibitions, a residency, and at some point I'd like to focus on writing. I have my studio, thank goodness, so I'm going to keep making the work and present it where I can.

Eventually, I would like the financial freedom that allows me to write and paint all the time. I don't know how you go about securing that. I don't want an extra job like I have now, for stability, the rent - the responsibility ... I hate it. I wanna write a screenplay, a book, make some images, and a record. I always have this harrowing feeling that time is running out. Maybe it would be a good idea to settle down and become a functional human being, but I don't have the time!

KM: What do you like about ITCH? Why do you choose to publish in ITCH?

HS: I stumbled upon ITCH through Art South Africa and instantly appreciated it. Its value is clearly that it's where creativity can find a platform. As a South African living abroad, reading and watching contemporary items from home was pivotal. ITCH is the kind of publication at which culture actually happens, while others are chasing events and phenomena to which they will never be related. The most authentic way to be relevant is to use the context as content. ITCH has the capacity to merge different sources of creativity regardless of their origin, without losing its own fundamental identity.
Tweet
Published in NEWS
More in this category: « Finding my own way into how I act How We Ended Up Here »
back to top
© 2022 ITCH. All rights reserved. Contributions copyright of their respective owners  |  Privacy policy  |  Terms of use